Renaissance composer Claudio Monteverdi was onto something when it premiered The Orfeo in 1607, which many consider to be the first great opera. The Orfeo tells the ancient Greek story of Orpheus, a superbly gifted musician, who ventures into the underworld to rescue his wife Eurydice from Hades. This spectacle of singers and dancers sharing the stage with 40 instrumentalists was revolutionary.

Fast forward over 400 years, and the story of Orpheus and Eurydice opens a new path in the groundbreaking story of Anaïs Mitchell. Hadesville. In Mitchell’s music and lyrics, the timeless tale takes on new life, set in a New Orleans speakeasy, the kind of place where timeless tales are often told. Hadesville is located at the intersection of Greek tragic storytelling and American folk rock.

Hadesville is part of folk, rock, blues, gospel and jazz. While not typical of Broadway, these styles lend themselves to storytelling, says Nathan Koci, music director for the show’s national touring company. “I think poetry has a lot to do with it. It’s that kind of ‘storyteller with a guitar’ – there’s so much rhythm, meaning and word choice that goes into everything.

Koci has been involved in Hadesville for five years, having been a major part of the show’s genesis. He served as associate musical director for its pre-Broadway performances at the New York Theater Workshop and in Edmonton, Canada, and has watched the show grow and develop into its current form. He credits Hadesvillethe unique approach and appeal of its songwriter. “[Mitchell] has a unique and special style that I think carries it in a way. I think she’s a really amazing storyteller at heart.

Mitchell’s musical journey is not what you’d expect from a Tony-winning composer. To begin with, she writes her songs on the guitar rather than the piano. This has an impact on the musical style.

“On the mic level, it’s still very guitar-driven,” says Koci. “There are a lot of numbers that I don’t start. The guitarist (Michiko Egger) right behind me is the one who really drives the bus most of the time.

It helps keep the show rooted in the folk music identity, he says.

Koci is no stranger to storytelling through American folk music. He recently served as musical director and vocal arranger for Tony’s revival Oklahoma!which reinterprets the orchestra of Rodgers and Hammerstein with a bluegrass septet. Oklahoma! arrives at the Orpheum in August. The task of orchestrating Mitchell’s guitar chords for Hadesville, however, fell to original band members Michael Chorney and San Francisco native Todd Sickafoose. The couple won a Tony for their work. 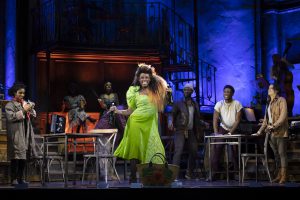 Koci says it’s their experience that has helped keep Mitchell’s style in the show’s DNA.

“Everyone’s daily bread is to create excellent folk, rock and jazz records. And it’s kind of this world that really gave birth to the whole musical end of [Hadestown]instead of coming from a real veteran Broadway team,” he says.

“It created the opportunity to filter out people who really fit the show aesthetically,” Koci says. “It’s a lot of people who maybe aren’t normally from the musical theater world…and I think that gives it its own identity and sound.”

Kaci leads the seven-piece ensemble from the keyboard, although some numbers require her to pick up her accordion. Guitar, bass and drums complete the rhythm section, accompanied by violin and cello. There’s also a scene-stealing trombone that helps cement the jazzy vibe right from the opening number.

Even Broadway regulars had to adapt a bit. Tennessee-born Tony winner Levi Kreis draws on his Southern experience for the role of Hermes, the narrator. Koci cites a particular call-and-response moment between Kreis and Edmonton jazz trombonist Audrey Ochoa that evolved as the show grew. It could take another life when a new trombonist joins the band next week.

Besides the plot, Hadesville shares a lot in common with its lyrical ancestor. You won’t hear much spoken dialogue as the show is sung. There are moments reminiscent of the “recitative” one would hear in an opera, but sung in a blues style. And just like in Monteverdi’s early operas, the instrumentalists are on stage for the entire performance, rather than hidden away in an orchestra pit. 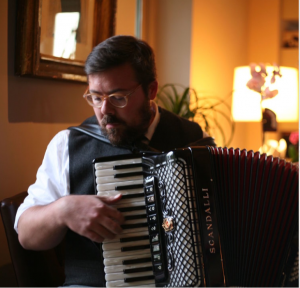 Having them spread out on stage in the middle of all the action comes with its own set of challenges. Koci tells stories of band members practicing at home with lights shining on their faces, trying to acclimate to the environment on stage. But the gain is worth it.

“It’s good to be integrated with the actors… to be in the same space. Everyone owns the storytelling,” he says. The proximity of the actors also influences the group. “If you’re playing for a dance break, to be able to be on stage and see the dance break, it’s magnificent! »

Actors can also show off their instrumental prowess. Orpheus actually plays his own guitar during the intimate and moving “Epic III”. The same is true when the Fates (three goddesses who affect the destinies of mortals) take up their violin, accordion, and percussion instrument.

Other musical highlights include the soulful opener “Road to Hell,” the burning barn “Way Down Hadestown,” the haunting “Why We Build the Wall,” and “Wait for Me,” whose melody was the catalyst. Mitchell’s creative for the show. One of Koci’s favorites is the second act overture, “Our Lady of the Underground,” an unexpected contribution from Persephone, goddess of flowers and lover of Hades. The jazzy solo takes the audience back to the New Orleans nightclub after intermission, introduces them to the band members before continuing with the story.

Successful storytelling is due to more than music. Rachel Chavkin’s directorial vision melds the shows defining elements and themes. Hadesville mixes romance and politics, using the decaying marriage of Hades and Persephone as an allegory for the disintegrated relationship between industry and the environment.

Another seemingly obvious political analogy is the construction of a wall by the subjects of Hades. In the more haunting Act 1, Hades asks, “Why do we build the wall, my children?” to which they stupidly reply: “We are building the wall to keep us free”. This plot point comes from early drafts of Mitchell’s show and predates the MAGA movement by several years.

While the political nuances are obvious, they are not judgmental. “I like that it doesn’t pretend to say ‘and this is how it should be,'” Koci says. He says the themes are wrapped in iconic human conditions like love, fear and jealousy. These elements push their human characters to make certain decisions, but the show leaves it up to the listener to make up their own minds.

The technical elements of the show feature significantly in the narration. Rachel Hauck’s set design combines NOLA’s historic Preservation Hall with an ancient Greek amphitheater. Bradley King’s lighting design uses movement and color to contrast the beauty of the dream world of Orpheus with the cold, fiery underworld of Hades.

“It’s almost reminiscent of a rock and roll concert in terms of how the audience feels,” Koci says. “There is a bit of magic and whizbang that happens. The space changes, but you are still in a bar.

Hermès tells us that we are here to listen to a story told in song. It’s an old song, and a sad song. The world of history badly needs hope. Orpheus could well be the hero to deliver this hope. But then again, it’s a sad song.

Despite the ending Hadesville may have wider appeal than most Broadway shows. His musical decisions defy both Broadway tradition and the wave of popular music that defines many new productions. Its mix of folk and rock makes its storytelling both more poignant and more accessible.