From campfire to stage light created as part of the 2022 Cairns Indigenous Art Fair (CIAF). This is the incredible life story of First Nations (Ewamian and Western Yalanji) interpreter David Bindi Hudson. Conceived by Hudson and written with Cindy Hudson and Kathryn Ash, the show is directed by acclaimed Indigenous director Isaac Drandic, with music and lyrics by Hudson, Nereace and Nigel Pegrum.

Hudson paints a living picture of his life using his voice, his body, his yidaki (“the old voice of the future”), his guitar and the musicians who accompany him on drums and piano keyboard. The set is simple but gently effective. The performer is positioned at the very front of the stage in a round space, in fact a hearth (a campfire created by the lighting). Real campfire smoke rises from a wooden container. A jagged corrugated iron background functions as a screen onto which photographic images and films are projected.

The structure of the play is simple: a chronological sequence of important life events from childhood through 2005. (Significant personal and professional milestones after 2005 make a very good case for a sequel!). If you had any concerns that this piece was of the “BIG I AM” variety, Hudson dismisses them at the start with self-effacing humor, establishing an instant rapport with the audience.

In just over an hour, he recounts his life journey, an incredible series of improbable events, many of which are capped off with song. Presenting the family scene of her childhood and youth as close and supportive, Hudson sings Southern Sky, a song about the importance of family. The stars are family, with the green star being his Irish uncle.

itchy foot is an ode to his beloved late mother, Esme, and her desire to be on the move as a young woman. It was his move west from tropical North Queensland to Hudson’s father’s Ewaman country, to take up a job on a cattle ranch, that changed his life forever. Surrounded by relatives, a young Hudson was schooled in traditional knowledge and given the name Bindi. His elders could see that his great strength lay in his ability to be forward-looking, always envisioning a way to shape the future for the better. This knowledge guided his path and gave him confidence in his creative projects.

His wife, Cindy, is also an integral part of his relentless desire to conquer new horizons. Offering to drive him home after admiring his prowess on the football field in Darwin, she offered him a cup of tea at her house, and the rest, as they say, is history. Very best cup of tea expresses Hudson’s love for the woman who is “the best thing that ever happened to me”. Despite their personal and professional success, the couple had to deal with racist attitudes towards their “intermarriage”. Hudson deals with this subject in the song when the heart speaksdepicting the unstoppable force of true love in the face of social disapproval.

Through all the personal and professional ups and downs of a very eventful life, Hudson makes it clear that traditional Australia’s lukewarm reception to our First Nation’s culture, versus the warm and enthusiastic embrace of the public abroad, is a source of pain. This is revisited by Hudson recounting his first street experience, playing yidaki at Kuranda Market. A mostly positive day, with tourists throwing money in a hat, ended with a scathing quip from a local man, “I thought we got rid of you a lot! Go home!” Perplexed, the young man scratches his head, thinking: “I am at home”. The re-enactment of this event is sickening, not because it is rare or surprising, but to capture the lasting impact of an attempt to disillusion a young Aborigine from any idea of ​​climbing above the lowest rung. of Australian society. 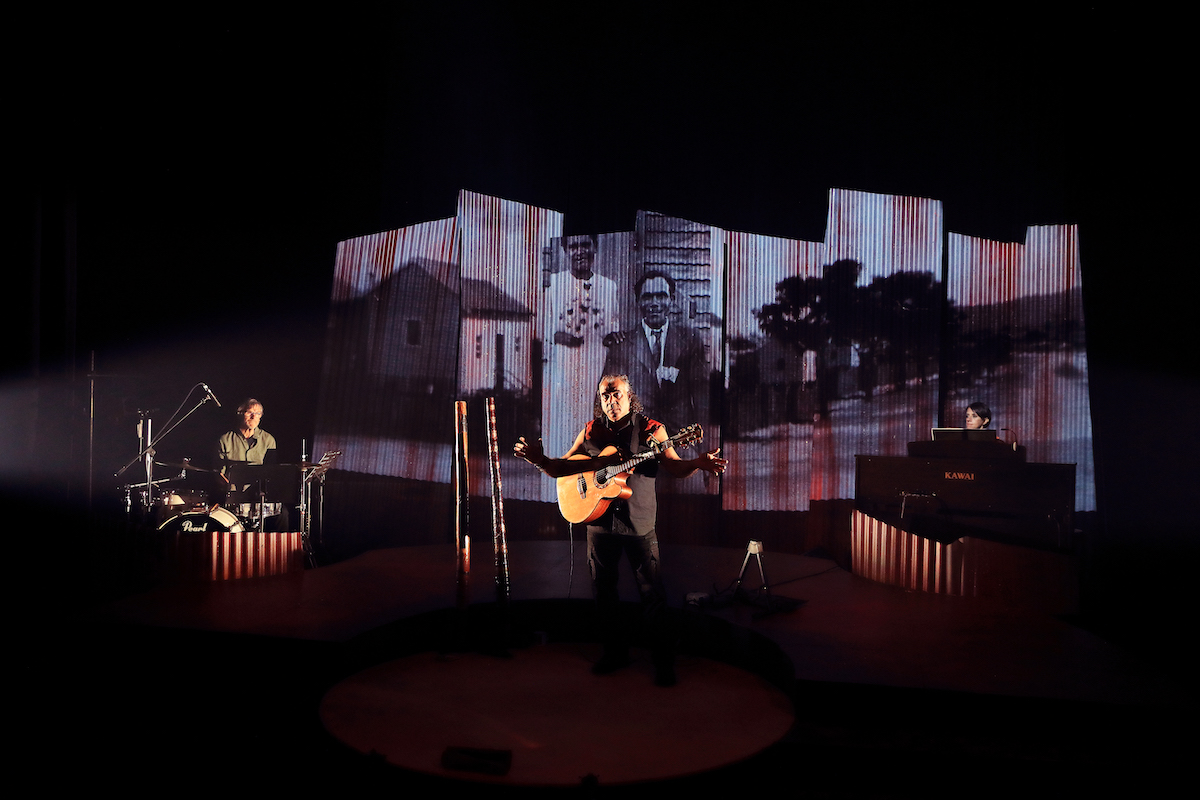 A highlight of his career, the invitation of the Greek instrumentalist Yanni to join him for a world tour is celebrated by a film. Playing in fantastic venues including the Taj Mahal and the Forbidden City, Hudson would open shows playing yidaki to audiences of 20,000. The film of these concerts is projected on the corrugated iron background. Young Hudson is seen performing in front of a mesmerized audience, wildly cheering and clapping. A mature Hudson watches from the stage, clearly moved by the images.

While this piece is ostensibly the telling of one man’s story, it is equally important an invitation for traditional Australia to connect and share the richness of our Indigenous cultures. The final scene sees Hudson claim that “a lot has changed in my garden, but more needs to be done”. The lights go out, bringing out the glow of the campfire. Hudson’s transformation from an everyday posture to an intense spiritual state is astounding. His body moves with hypnotic weightlessness, and he breathes out the words, “Here’s your chance, take it…take it…take it.” Stomping his foot, he invites the audience to follow him, and everyone in the theater joins in the punchy rhythm, repeating “Connect, connect, connect”, as Hudson transmits the gentle heartbeat of the yidaki to the audience.

First Nations director Isaak Drandic wielded an invisible hand, crafting a tight production that’s funny, emotional, sharp, and intense in good measure. There is no more fat to trim and the pace is fast. Creating an integrated dramatic whole from a life so rich that many chapters are glossed over was no small feat for the writers and director. Additionally, the dramatic vehicles of comedy, music, dance, theater, and film play together in creative accord.

This production is an important and innovative addition to a growing body of literature, television, film and theater created, produced and performed by First Nations artists who inform and entertain Australian and international audiences. From campfire to stage light has the potential for a successful Australian tour based on strong entertainment value and the generous sharing of First Nations history and culture.

From campfire to stage light performs at the Bulmba-ja Theatre, NorthSite Contemporary Arts, as part of the Cairns Indigenous Art Fair (CIAF) until July 16.